Recreate the Very First Oscars Menu for Your 2020 Oscars Party

The glitz, the glamour, the...French fries and half chickens?

Attending the Oscars is a lifelong dream for many, but being one of the millions of fans who watch the show’s telecast has its benefits—particularly, the opportunity to chow down during the nearly four-hour ceremony. For decades, the Academy Awards has been a food-free affair (a situation host Jimmy Kimmel tried to remedy at 2018’s gala by providing snack boxes to attendees), but that wasn’t always the case.

Dinner with a side of awards, courtesy of The Hollywood Roosevelt

The First Oscars Was All About the Food

In fact, the very first Oscars, held in 1929 at the Hollywood Roosevelt Hotel’s Blossom Room, was more of a dinner party than an awards ceremony—the winners were announced three months prior and it took only 15 minutes for host and Academy of Motion Picture Arts and Sciences President Douglas Fairbanks Sr. to present the evening’s 15 awards. (For reference, just the opening number of the 1989 Oscars—you know, the one with Rob Lowe and Snow White—took nearly as long as the entire inaugural ceremony.)

With the recipients of the statues already known, dining, not drama, was the focus for the 250 guests, which included Hollywood luminaries Charlie Chaplin, Cecil B. DeMille, and Mary Pickford.

The first Oscars menu, courtesy of The Hollywood Roosevelt

But the Menu Was Surprisingly Simple

The meal began with a selection of olives and nuts, which were often featured on menus in California during that time. “They were not only popular items,” says Richard Foss, board member of the Culinary Historians of Southern California, “but the most famous exports of the state.”

There was also celery (a canapé tray staple, according to Foss) and rolls for eating, of course, and in the case of Chaplin, potentially for amusement.

Next came the soup course, a bowl of consommé Celestine. The French classic, consisting of clear chicken broth topped with a julienne of crêpe, is now a rarity in American dining but was a favorite during that era, especially at banquets. “While time-consuming to make, it used cheap ingredients,” says Foss.

Entrees consisted of your standard fish and chicken options, in this case filet of sole sauté au beurre (sole sautéed in butter) and half broiled chicken on toast, a riff on a dish that likely would have been an Instagram sensation had the technology existed at the time. “One of the fad dishes of the late teens and early ’20s was quail on toast and this was treating chicken the same way,” says Foss. “It was a stylish presentation more than anything else, though people did eat the toast with the chicken drippings and gravy.”

The mains were accompanied by a simple lettuce and tomato salad along with a pair of sides: California-grown new green beans (now known as baby green beans) and Long Branch potatoes, a preparation of seasoned French fries that originated in New Jersey.

Service of vanilla and chocolate ice cream, a selection of cakes, and coffee brought the evening to a close.

As for booze, well, there wasn’t any. Thanks to Prohibition, not a single drop of alcohol was served that evening, at least not officially—Foss suspects a hip flask or two may have been passed around at the event.

Though certainly impressive by the standards of the time, the food served at the 1929 Oscars wouldn’t exactly have been considered award-worthy by today’s standards. “This is well before the idea of celebrities as foodies, or of celebrity chefs,” notes Foss. Ninety-plus years later, the Academy has certainly raised the bar when it comes to its culinary ambitions. The organization’s official after party, the Governor’s Ball, has become a celebration of gastronomic extravagance ever since chef Wolfgang Puck took control of the stoves 26 years ago. This year’s menu is 70 percent plant-based and includes apple spring rolls (in which the paper-thin apple slices are the wrappers), and an extra-cheesy cacio e pepe.

Still, while the Governor’s Ball spread is sure to please the likes of Chrissy Teigen, it likely wouldn’t have the same appeal to the stars of Hollywood’s golden age. “Hollywood was too new, most of the stars too unsophisticated, to make them icons of good food,” says Foss. “They may have had style, but not taste.”

Dine off gilded plates and feel like a celebrity yourself, however simple the food that's served. 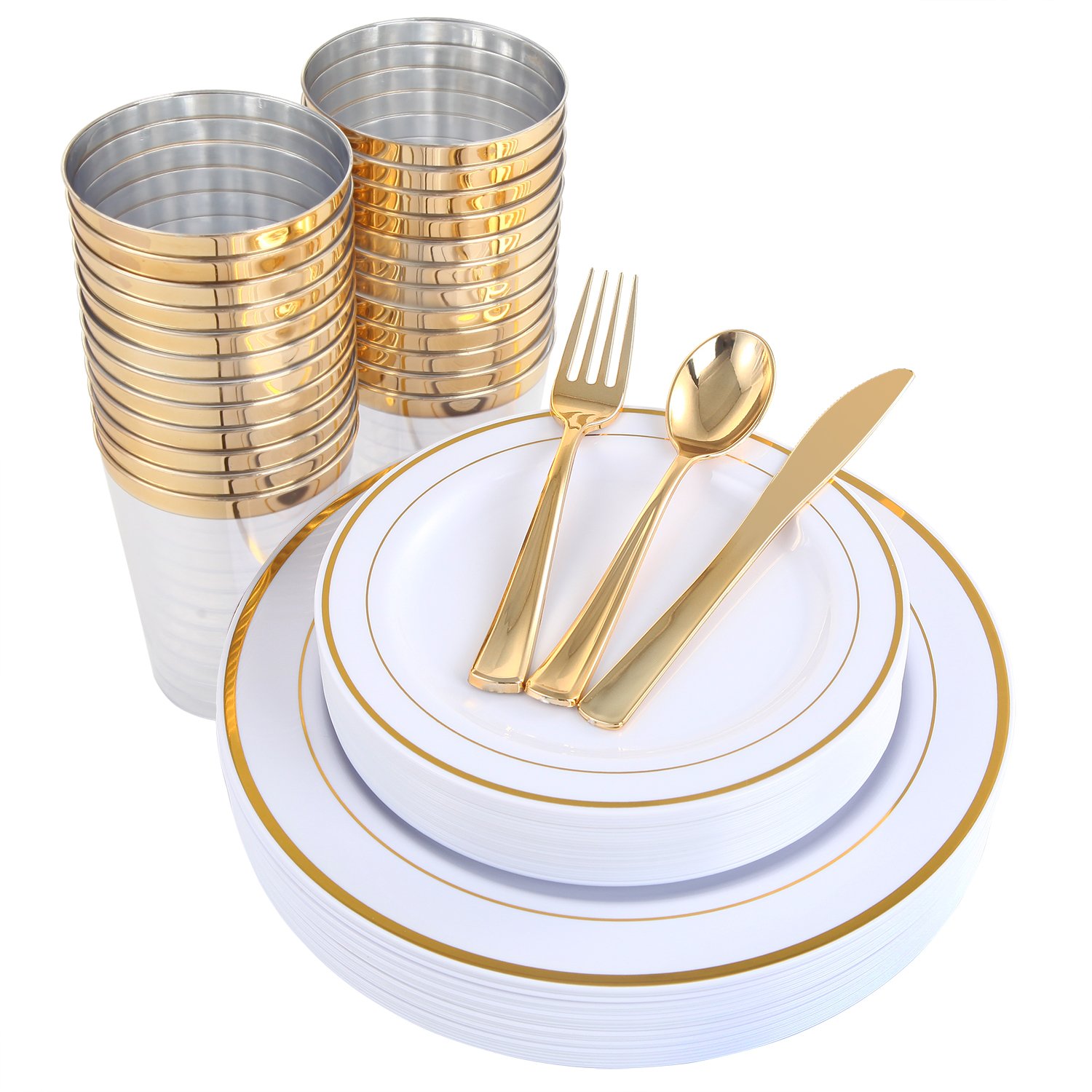 This budget option lets you fake a little Hollywood magic (and save some cash).

Sure, you could cobble together an Oscar nominee-inspired menu, but if you like to keep things classic, pay homage to the original Oscars dinner at your own get-together.

Update the relish tray with more modern additions like fresh berries and marinated mushrooms, but represent the classics (like celery and olives) too. They’re all perfect cocktail nibbles, no hip flasks required. Get the Relish Tray recipe.

This simple chicken broth with sherds of herbed crêpe may have fallen out of fashion long ago, but it’s still an elegant way to start a dinner party. Get our Consommé Celestine recipe.

For a fancier twist, tuck black truffles under the skin before you roast it, then whack it in half and serve over toast—or simply carve on a platter and give your guests manageable slices instead (since the chickens of yore were much smaller than the ones we normally see at the store today). Get our Basic Roasted Chicken recipe.

The first Oscars were clearly a time before celebrities were afraid of carbs and everyone was keto—dinner rolls, potatoes, and toast were on the menu. So don’t forget the bread basket on your own table; these classic, soft Parker House rolls are perfect, and definitely impressive. Get our Parker House Rolls recipe.

Go one better than a simple mixed green salad and sauteed green beans, and make a crisp haricots salad instead. Whole grain Dijon, garlic, shallots, white wine vinegar, capers, and parsley give it a fresh bite. Get our French Green Bean Salad recipe.

For dessert, debut a reboot of classic angel food cake—skip the tube pan and make it a layered affair instead. Fill it with bright lemon curd and top it with fluffy whipped cream, fresh blackberries, and salted caramel sauce (sometimes the sequel really is better than the original). Get our Angel Food Layer Cake recipe.