It is all too common for us to welcome a new year by restricting food intake, adopting fad diets, and ultimately failing at both of these endeavors. At Chowhound, our alternative mission is to take readers out of their food ruts so they’re forced to try *new* cuisine that may inspire, enhance, or even challenge their typical meal routines. No Keto, no kale salads, no constantly counting calories…or at least none of these things permanently. Life is all about balance and no hardcore diet (as we’re told time and time again) is sustainable in the long run, unless you’re Arnold Schwarzenegger or training for the 2020 Olympics.

One chef who champions such a mission is Eric Ripert, famed chef/owner of N.Y.C.’s Le Bernardin and Blue at the Ritz-Carlton Grand Cayman. I had the luxury of traveling to the latter (courtesy of Net Jets) to experience the legend’s impact and Michelin-starred cooking firsthand.

Upon arrival, I was quick to learn that the Ritz-Carlton Grand Cayman is so much more than a fancy beach resort with a beautiful pool and plush gardens. It is a mecca of amazing culture (employees from all around the globe) and food (six unique restaurants), all with an unparalleled attention to detail (even the smell of their carpet shampoo became iconic). As a result, the 144-acre oasis is a befitting host for the island’s highly anticipated Cayman Cookout, now in its eleventh year and headlined by Ripert himself. The event welcomes dozens of the world’s top chefs for creative sips and eats, local tours, and exclusive tastings, allowing guests to also partake in cooking classes and demos that both expand their palates and advance their kitchen techniques. (This year’s dates are Jan. 17-20. For more information, click here.)

I previewed the cuisine with a seven-course meal at Blue (featuring the most delicious butter-poached scallop I’ve ever eaten in my life), followed by the opportunity to chat with the world-famous chef about Grand Cayman’s overall food scene, adventurous and underrepresented eating, as well as his early prediction for 2019’s biggest food trend. And no, it’s not served on toast. Read on for the full interview. 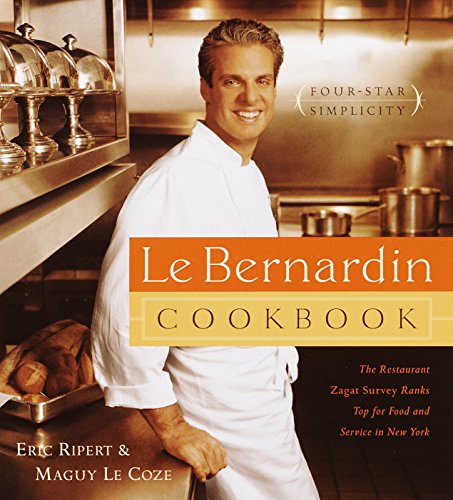 Recipes from one of the world's best restaurants.

Chowhound: We’re obviously somewhere extremely special at the Ritz-Carlton Grand Cayman. What about Caribbean cooking inspires you? Is it the ingredients used, the freshness, the flavors, the people?

Chowhound: It’s the new year and we think a great resolution is trying new cuisine or ingredients. If somebody is a self-described picky eater, do you have any tips to have them to branch out of their comfort zone?

ER: A picky eater usually, from what I have observed, does not like many green vegetables. They’re not very adventurous in general, but seafood is something they don’t enjoy as well. They are more into white meat and starch like potatoes, rice, and things like that. This is my understanding of picky eaters. I think eating more vegetables [not starches], trying to do things like grains and cooking lentils— it takes 20 minutes. You put the lentils in cold water, a piece of onion, a bit of carrot, and 20 minutes later you have something that is very good and very different.

With fish, I think they should try to get out of meat like chicken and pork. Salmon is always tricky because some people love it and some people think it’s a bit strong in flavor. I recommend white fish…something like halibut, for instance. It has a beautiful texture and delicious flavor. When it’s fresh, it’s not fishy at all. That would be something that would be a good try. It’s easy to find all over the U.S., as well. Any white fish that is not fatty, in general, is pretty easy [to introduce].

Courtesy of the Ritz-Carlton Grand Cayman.

Chowhound: Is there a food that, no matter how many times you’ve tried to prepare it, you just don’t like it?

ER: No. Whatever I don’t like, I don’t cook. It’s very simple: I don’t like fast food or processed food. It’s something that I do not bring home. Now if I have no choice and it’s a can of Campbell’s soup or something like that and I have to eat it, I’m going to try my best to fix it.

Chowhound: You’ve obviously been all around the world trying different foods. Is there a specific type of cuisine that you feel is really underrepresented in media from one area of the globe?

ER: Interesting. I don’t think the British and the Germans have enough recognition. You eat extremely well in Germany. And the British have some very good food. I’m not necessarily talking about London because London has a lot of good restaurants which are not necessarily inspired by their own culture. There’s a restaurant called the St. John in London that serves typical British food that is actually on the 50 Best list. It’s very good. Those two countries don’t get much recognition. Scandinavia, for some reason, gets total recognition. Those countries are left out.

Chowhound: Americans are obsessed with coming up with the next food trend, whether it’s avocado toast or the Unicorn Frappuccino. Do you have any predictions on ingredients or dishes that are really going to make a mark in 2019?

ER: Every time I try to make a prediction, I’m wrong. I think a trend that’s growing and is not going to fail is to eat more vegetables. And I see that more and and more. In aisles of supermarkets, I see more vegetables, chefs are writing cookbooks about vegetables, and I think that organic is really something that people are really starting to want. You pay the price because organic vegetables are more expensive, but when you have the choice between pesticides, GMO, or growing something with hormones or antibiotics, what do you choose? It’s really difficult to pinpoint what’s going to be the next kale. We had the cauliflower, which is fading as well, like the kale. Usually it’s something that is not expected, but everyone’s been eating it for a long time. It could be grains. Lentils could be the ones. They’re very good for your health. I’d say lentils.