A Comprehensive Guide to Barbecue Sauce Across the Country

Take a trip across the United States of Sauce.

“Barbecue sauce” is a blanket term that doesn’t necessarily do justice to all the regional styles of BBQ sauce across the country. Let’s take a look at the differences among them, from the obvious (white BBQ sauce) to the more subtle (Kansas City style vs Memphis BBQ sauce).

Summer is just around the corner, which means there’s plenty of time to perfect your grill game. Or better your barbecue, if you prefer. You ever think about the word “barbecue?” It’s a crazy word because it has so many applications. It refers to a cooking process, the implement used to cook, a meal, a gathering, and a condiment. Holy smokes! Maybe it would just be easier to talk about what barbecue isn’t. Anyway, I’m going to be narrowing down the subject of this piece to the condiment variation of barbecue—barbecue sauce.

You know that scene in “Wedding Crashers” where Jeremy (Vince Vaughn) talks about his love for maple syrup? When it comes to condiments, I feel about barbecue sauce the way Jeremy feels about syrup. You can pretty much put it on anything—sandwiches, salads, even pizza (hello, barbecue chicken pizza)!

Not the Same Thing!What Is the Difference Between Barbecuing and Grilling?There’s probably no better item to put barbecue sauce on than authentic, slow-cooked barbecue. That being said, grilled meat is a close second. As an aside, barbecued meat is not the same as grilled meat. Barbecued meat is cooked over indirect heat over the course of several hours. Grilled meat, on the other hand, is cooked over direct heat for a matter of minutes. Nevertheless, whether it’s the smoky flavor of the ‘cue or the flame-kissed flavor of the grilled variety, barbecue sauce pairs perfectly with both.

Like the method, and the varied meat types and preparations, the condiment has regional influence. That’s why some barbecue sauces are thick, whereas others are watery; why some sauce is red, while others are more yellow; or why some are sweet, and others are spicy. This is another reason why barbecue sauce is so wonderful—its diversity. With all due respect to Heinz and Hunt’s, ketchup is, well, ketchup. Not so with barbecue sauce! As a result, you can have a completely different gastronomic experience, sometimes within the same meal, simply by using a different regional sauce.

In advance of last year’s 4th of July holiday, Google mapped out the most popular BBQ sauce searches by state:

There were a lot of low-carb, no sugar, and keto BBQ sauce searches, but there were also some region-specific queries (including Korean BBQ). Of the traditional American barbecue sauce styles, white barbecue sauce and Carolina barbecue sauce had the best showing—but they’re all worth knowing, and making at home.

Whichever sauce you go with, a heat-resistant silicone brush makes it easy to apply (without the risk of leaving bristles behind).

As we ease into summer and prime cook-out season, I’d suggest kicking your meal up a notch by including a few types of sauce to maximize everyone’s enjoyment. And if you really want to impress, try making your own. Here are several regionally inspired ideas:

When the average American who resides in a place outside of any of the regions specified by this article thinks of barbecue sauce, there’s a solid chance they’re thinking of the stuff made famous in Kansas City. It’s sweet, tomatoey, and fairly thick. Overall, it’s the stuff that put barbecue sauce on the map. Get the Kansas City Barbecue Sauce recipe.

Pork steaks are a signature of St. Louis-style barbecue, grilled in backyards across the region. Get our pork steak primer at the link in our bio. 📷: @jennsilverberg

Get a taste of St. Louis delivered to your door.

To say there’s one sauce typical of Texas is nuts. Everything is bigger in Texas, and that goes for the diversification of barbecue sauce as well. But, a few things that Texas sauces have in common are that they are on the spicier side, they’re on the smokier side, and they’re on the thinner (consistency) side (at least compared to K.C. sauce)—they may be better called mop sauces, which are brushed (or mopped) onto the meat as it cooks, and generally contain less sugar so they don’t burn during the cooking time; they also help keep the meat moist. There are some purists in Texas who don’t care to use sauce at all, but the reality is, sauce is good, and Texans know it. Get the Texas-Style BBQ Sauce recipe.

This sauce is going to be more “typical” than “atypical,” which is to say it’s going to have some sweetness, and it’s going to feature tomato. On average, it’s going to be a bit thicker and sweeter than the Texas sauce, and a bit spicier and thinner than the Kansas City sauce. If you like St. Louis sauce, but could go for a little more kick, Memphis sauce is your best best. Get the Memphis BBQ Sauce recipe.

This sauce comes from one of the best-loved rib and BBQ restaurants in Memphis.

Unless you’re from one of these regions, the next three sauces are not likely to come to mind when you conjure up barbecue sauce. More’s the pity! North Carolinians favor a thin, vinegar-based sauce with a little kick. As a result, it’s going to register high on the tangy scale. Get the North Carolina BBQ Sauce recipe.

Where my mustard sauce lovers at??!! 🙋‍♀️🙋‍♀️🙋‍♀️🙋‍♀️ Just posted a new recipe today for this tangy and delightful South Carolina mustard sauce that everybody needs to try at least once. It’s such an awesome flavor combo and there is nothing like it on a pile of sweet smoked pulled pork. My 5 year old is a mustard freak and dunks everything he can in this stuff! 🔥🔥🔥🔥 You can grab the link in my stories or head to heygrillhey.com/blog to check it out/print it/bookmark/pin it/whatever you need to do to have this recipe in your arsenal fo upcoming summer cookouts! #heygrillhey #carolinabbq #southcarolina #mustardbbqsauce

What can I say? The Carolinas just do barbecue sauce differently. Where the North Carolinians favor a watery, vinegary sauce, the South Carolinians prefer a yellow sauce that features mustard. That’s right, I said mustard. If you haven’t tried it, you need to. The mustard and sweet flavors mix exceptionally well to create a tangy treat for your barbecued meat. Someone really should use that as a slogan. Get the South Carolina Mustard Barbecue Sauce recipe. 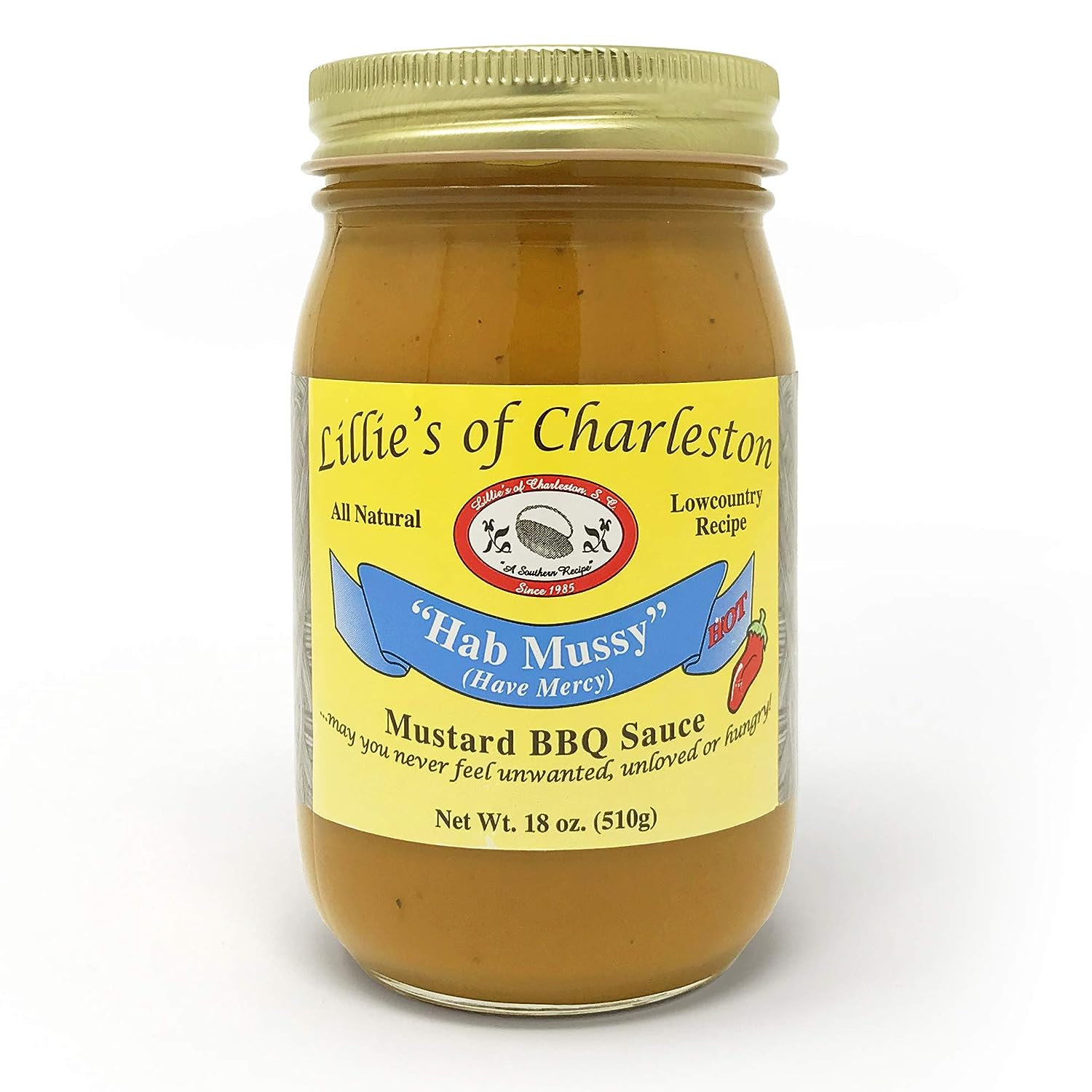 I’ve got a new recipe up today! It’s the perfect zippy and creamy Alabama White Sauce. Smoke some chicken and dunk it all up in this sauce! I’ve got the recipe link in my profile or in my stories! PS- did you know if you belong to #thegrillsquad you can view all of the recipes on my site without any ads? True Story. Enrollment opens on Saturday, put that in your calendars!

Take everything you thought you knew about barbecue sauce and throw it out the window. This is the stuff of legend, concocted by barbecue pioneer, Big Bob Gibson. If you’re in the mood for a white mayo-based sauce, this is the one for you. Get the Alabama White BBQ Sauce recipe.

Pro-Tip: If you are looking to serve sauce, your best bet may actually be to leave it on the side, especially if it’s a sauce with a lot of sugar, which is likely to burn if it spend too much time over the fire. If you want to apply your sauce to the meat, you likely want to do so only in the last few minutes of preparation. Personally, I like to slow-cook the meat, then brush with sauce, and finish on the grill or in the broiler for about 10 minutes.

Everything Else You Need to Know

Our Top Grilling Tips, Techniques, Tricks, and Tools for the Best BBQ Ever