The Origins of Odd Food Names, from Funeral Potatoes to Welsh Rarebit

Most recipes and menu items sport pretty straightforward names that tell you what it is you’ll be eating, like Chicken Noodle Soup, for instance. Some even allude to the preparation method: Slow Cooker Pulled Pork Enchiladas. Then there are things like Funeral Potatoes, where at least you know the main ingredient, and Toad in the Hole, where you hope the titular amphibian isn’t in the actual dish.

Cracking the CodeWhy Do We Call Deviled Eggs 'Deviled'?Why do some foods have such odd names? At heart, because people love wordplay, and probably have since the beginning of spoken language. But the specific names for individual dishes are often inspired by their appearance, their taste (take deviled eggs), their preparation (see Vietnamese shaking beef), their cultural significance, or their creation stories (if you’ve ever wondered why mayor of Flavor Town Guy Fieri calls his signature aioli-esque condiment “donkey sauce,” here’s your answer). Others, like puppy chow, have murkier origins, but all are intriguing in their own right.

Even basic culinary words we consider ordinary now, like doughnuts, ladyfingers, and sweetbreads, are a bit peculiar when you stop to ponder them and how they came to be. But the world of linguistics, even filtered down to just food-related terms, is incredibly vast, so let’s focus on specific recipe names that make you say huh, and maybe make you giggle.

Funeral potatoes are delicious, despite their dire name, which comes from the fact that they’re often served at luncheons following funeral services. The casserole of shredded potatoes enriched with cheese, sour cream, and condensed soup—and topped with crunchy cornflakes (or potato chips)—is easy to make, super comforting, travels well, and can feed a lot of people, so it makes sense. They’re also sometimes called Mormon potatoes, since they’re especially popular in Utah and often turn up at various LDS functions. And they got a lot of online attention last year, thanks to Walmart’s ads for a frozen version of the regionally popular hotdish that took the internet by storm. Memes may die, but funeral potatoes live on as a classic. Get the Funeral Potatoes recipe. 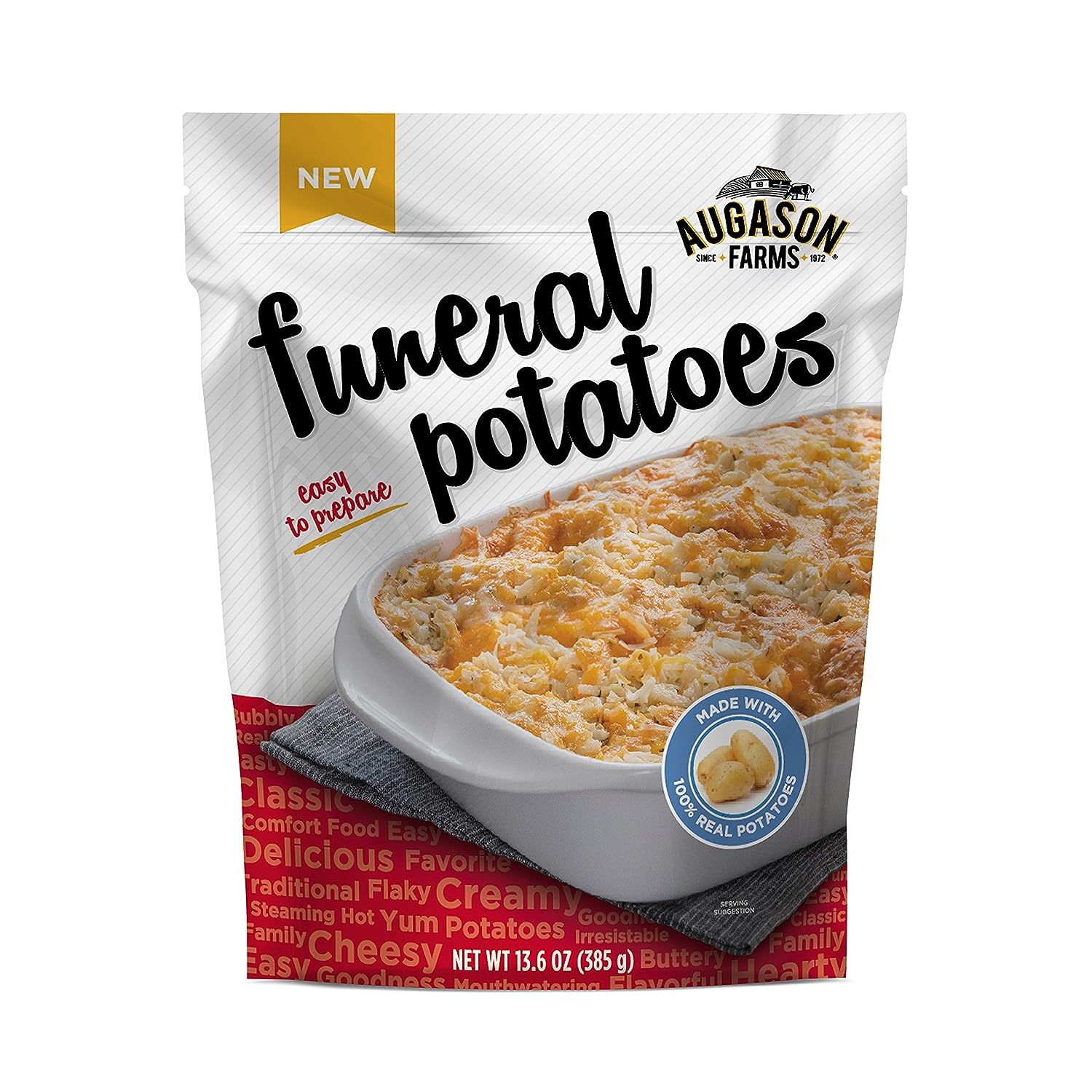 Are these disturbing, or to die for?

This dish of toast smothered in thick cheese sauce was enjoyed in Wales in some form since the 1500s, but they called it “caws pobi” (“baked cheese”)—the English were the ones who jokingly applied the “Welsh rabbit” name, first recorded in 1725. There’s never been any meat in the dish, nor was it meant to emulate it; rabbit was just considered an amusingly fancy term to apply to such a humble meal. There were nearly identical recipes for Scotch rabbit and English rabbit alongside the Welsh in the 1747 edition of “The Art of Cookery.” Rarebit seems to have been a misspelling that gained popularity, although some sources claim it was adopted to prevent potential confusion about the ingredients—in which case, “Cheese Toast” would have sufficed, but been nowhere near as fun to say. Get our Welsh Rarebit Bites recipe.

While your only exposure to spotted dick may have been from a can that was passed around amid plenty of chuckling at a White Elephant party, it’s a beloved British dessert, similar to figgy pudding. The “spotted” part of the name refers to the dried currants or raisins speckling the dough, while the rest is probably a corruption of the last syllable of “pudding” (the general term for British desserts, as well as a specific type of dish made from baked or steamed batter). The name’s been in use since at least 1849, when spotted dick first appeared in a cookbook, “The Modern Housewife.” Get the Spotted Dick recipe. 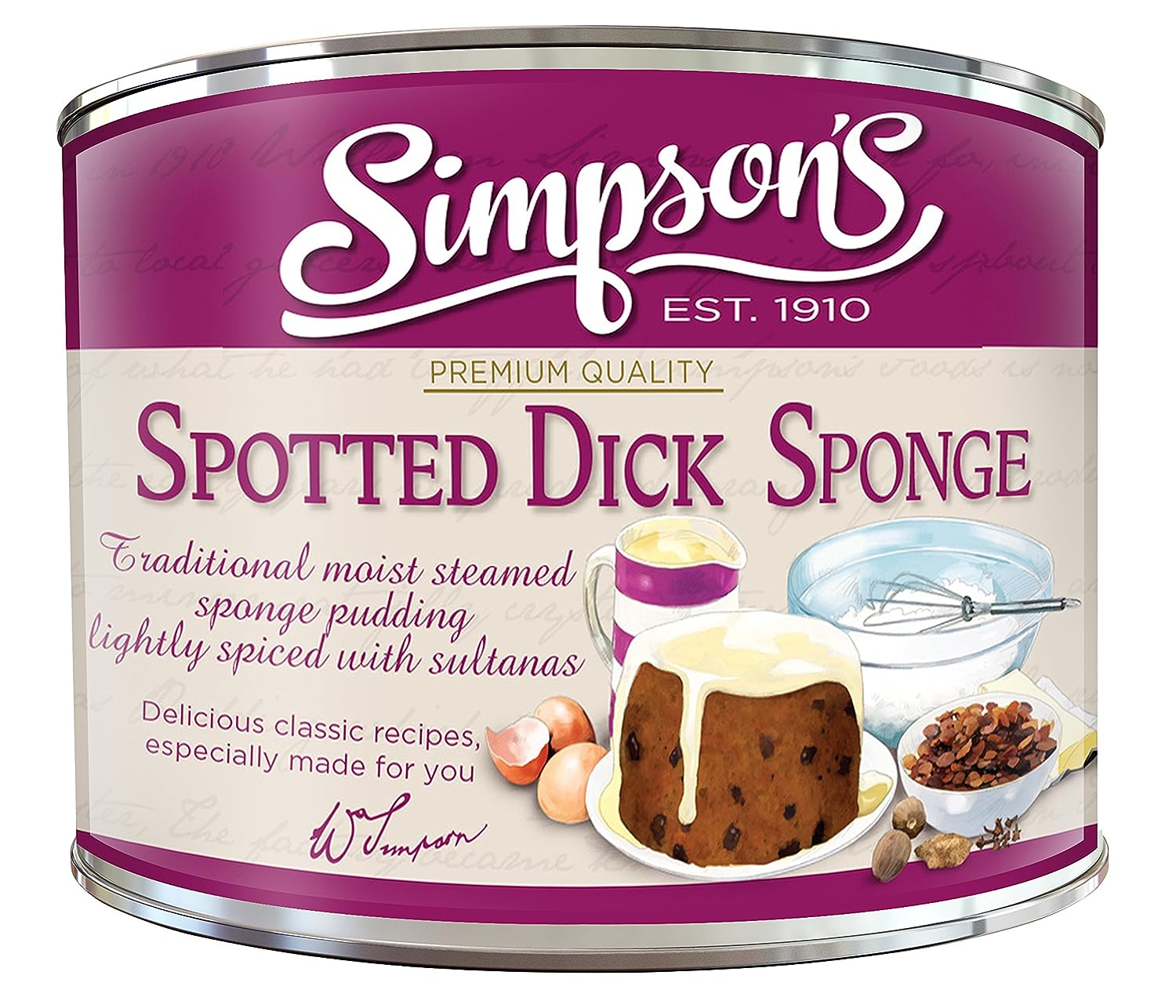 In case you want to try it...or wrap it up for a White Elephant party.

This one’s more mysterious. Some sources say the vaguely red-and-black colors of the dish account for the devilish name (conveniently ignoring the whole “horseback” part; maybe “devils on pigback” just didn’t sound impressive enough). Other sources say they’re a diabolical answer to “Angels on Horseback” (oysters wrapped in bacon), and were originally the very same dish with spicy pepper added, hence the hellfire-denoting name change. According to this same source, the prunes that became associated with the Satanically titled dish were simply a cheaper and more readily available substitute for the shellfish, but had nothing to do with the infernal name itself, which is probably correct—but that still leaves the mystery of how the original dish got its angelic designation. Oyster shells do look vaguely like wings (and the bivalves are considered heavenly by their fans…?), so perhaps that accounts for the angel bit—as for “horseback,” your guess is still as good as mine. Get our Devils on Horseback recipe.

Here’s a vastly more straightforward member of the delightfully named food family. Bubble and squeak is an English dish traditionally comprised of leftover vegetables from a Sunday roast, primarily potatoes and cabbage or brussels sprouts. It can include other veggies and even chopped or shredded meat, but the indispensable cabbage makes bubbling and squeaking sounds as it’s cooked, hence the adorable title. Get the Bubble and Squeak recipe.

Toad in the Hole

Another charming British bite, toad in the hole is made from sausages baked into Yorkshire pudding. Presumably, the dish is named for the look of the partially-concealed sausages peeking up out of the batter. One perhaps too-good-to-be-true tale says it was created in gentle jest after real toads ruined a putt during a golf tournament, but even if that’s not the case, someone had to have clocked the resemblance (or imagined it…) and come up with the name. “The Art of Cookery” does have a recipe for “Pigeon in the Hole” that actually contains pigeon (with other meat like rump steak or lamb kidneys suggested as possible substitutes), but there’s no record of anyone ever using frogs or toads in the dish. (You’ll also see some people use “toad in a hole” to describe an egg cooked inside a piece of toast, but most call that Egg in a Nest, for far more obvious reasons.) Get our Breakfast Toad in the Hole recipe.

Similar to Welsh rabbit, this Victorian-era British dish does not contain any woodcock (a red-breasted, white-legged fowl often called the king of game birds). Instead, it’s made from soft scrambled eggs piled on toast and topped with anchovies, and traditionally calls for “Gentleman’s Relish” (or Patum Peperium), a super-secret-recipe spiced anchovy butter you can make at home or buy online. As to why this combination was christened Scotch Woodcock, someone must have thought it sounded jolly amusing (and the Scotch refers to Scotland, where it was invented); another highbrow name for a humble dish. Although it seems best fit for breakfast, lunch, or even a light dinner, it was often served as a savory end-of-meal alternative to a sweet dessert. Get the Scotch Woodcock recipe.

Allegedly, only one member of staff in the factory knows the actual recipe for this classic British anchovy paste.

A Southern specialty, these soft-centered, crisp-shelled cornmeal fritters come with plenty of stories behind their creation—most of which aren’t true, but are oft-repeated enough that they’re widely accepted as fact. This is a fascinating, in-depth look at the actual origins of both the fritters (which used to be called, in different regions of the South, red horse bread, red devils, three finger bread, and wampus) and how they came to be commonly known as hushpuppies. Get our Shrimp and Okra Hushpuppies recipe.

If you’re not a fluent French speaker, “pets de nonnes” sounds fairly lovely, and indeed, it describes a wonderfully airy, fried, sugar-dusted beignet. Unfortunately—or amazingly, if you have a juvenile sense of humor like me—the literal translation of the name is “nuns’ farts.” The pastry’s dainty and delicate nature is thought to account for the moniker, but in actuality, it may have originally been “paix de nonnes” (“nuns’ peace”), which just so happens to sound nearly identical to the more flatulent phrase in French. There are similar pastries called “nuns’ sighs” (“suspiros de novicia”) in Spain, lending credence to the latter theory. But once the cruder name caught on, there was no stopping it. You can also find “pets de soeurs” (soeurs means “sisters”) in Quebec—these are often confused with the puffs, though in fact they’re flaky pastries that look like flat, thin slices of cinnamon rolls. Both are delicious, and sure to elicit snickers from certain audiences. Get the Pets de Nonnes recipe.