New Orleans On a Roll: The City’s Classic Sandwiches

By Jen Wheeler
February 26, 2019 Edit
All featured products are curated independently by our editors. When you buy something through our retail links, we may receive a commission.
Any of these overstuffed specimens would be perfect for Fat Tuesday, or any other day of the year.

New Orleans is, among many other things, a great food city. Drilling down a little, it’s a particularly great sandwich city. From Mardi Gras to any given Monday, you can find lots of delicious things cradled inside distinctive bread, sandwiches that sate even the largest appetites, and feed a hunger for historical and spiritual communion too.

There are two sandwich stars that shine brightest in the Big Easy: the muffaletta and the po’ boy. But if you want to get more specific and split po’ boys into sub-groups, you could submit that, just as there is a “holy trinity” of vegetables (onions, celery, and bell peppers) almost always used in Cajun cooking, there is a sort of holy trinity of sandwiches that really stand out in New Orleans. That would be the muffaletta, the seafood po’ boy (a broad category still, but distinctly cohesive thanks to the pescatarian main ingredients), and the roast beef po’ boy.

Of course, there are many more fine examples to eat your way through, but let us pay homage to this time-honored trio (with a bonus shout-out to a Casamento’s classic). To paraphrase that well-worn welcoming cry, laissez le bon temps be on a roll.

Muffaletta by The Striped Spatula

Much of the most famous food of New Orleans is French-inflected Cajun and Creole cooking, but one of its best-known and most beguiling sandwiches is Italian in origin. The muffaletta (or muffuletta) is named after the type of bread it’s served on, a soft yet dense, round, sesame-topped loaf with a fine, tight crumb, which originated in Sicily and was brought to the US by Italian immigrants. They came to New Orleans in large numbers in the late 1800s and settled so heavily in the French Quarter, it was nicknamed Little Palermo at the time. The tradition of piling the round loaf high with cured meats, cheese, and the all-important olive salad is said to have been born in the early 1900s at Central Grocery, which is still in business and deeply beloved today, and keeping up with the times, also sells its muffalettas and olive salad online. 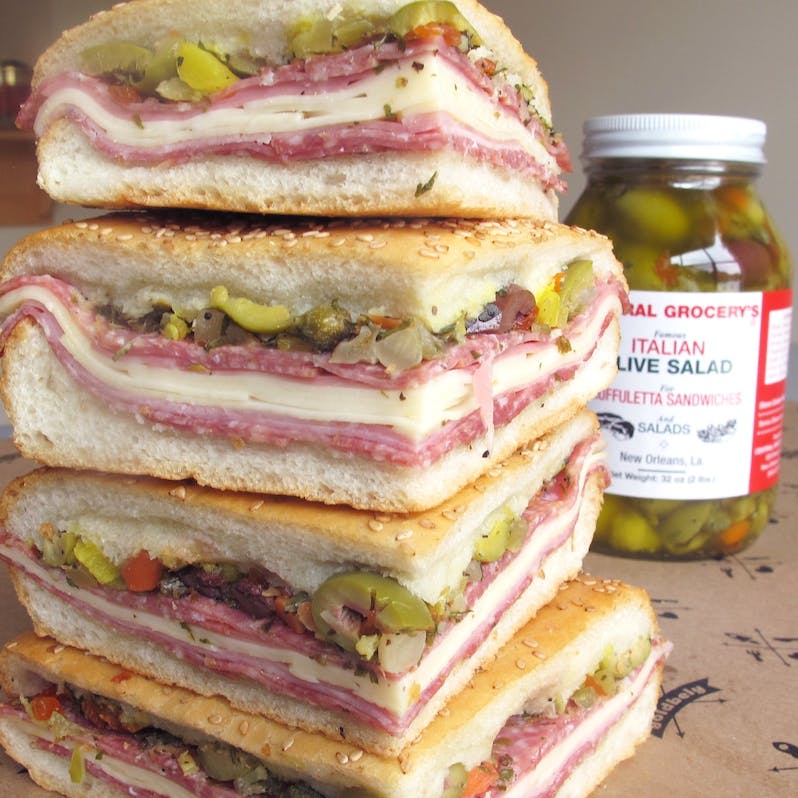 Central Grocery Muffuletta, 2 for $109 on Goldbelly

Shipped straight to you for a taste of NOLA wherever you are!

Typically, stacked high inside the loaf, you’ll find layers of soft, salty capicola and Genoa salami, maybe mortadella, plus sharp “picante” provolone and plenty of briny olive salad, made from chopped green olives, red peppers, garlic, onions, capers, herbs, and a generous amount of olive oil. When the sandwich is pressed down, the piquant oil and olive juices should seep out into the bread, obviating the need for other condiments—but not so much that the bread gets soggy. It can be weighted down overnight in the fridge so the flavors meld and it also flattens down a bit, which makes it easier to take a bite out of. It’s usually cut into large wedges and shared, because as delicious as the muffaletta is, there is probably no way you can eat an entire sandwich on your own. But find out for yourself; make this Mardi Gras Muffaletta recipe at home. And make your own Muffuletta Bread too if you’re up for it.

The po’ boy (aka poor boy) got its name during the New Orleans streetcar strike in 1929, when former streetcar conductors turned coffee shop owners Bennie and Clovis Martin vowed to feed every striker free of charge. They did so via exceptionally large sandwiches, and continued to serve these “poor boy” vittles through the Great Depression. The name’s stuck ever since.

It’s another sandwich that really rests, both literally and figuratively, on its bread. A perfectly textured, freshly baked loaf of New Orleans French bread—crisp-chewy outside yet incredibly airy within—is essential to a truly great po’ boy, no matter what’s in the middle. Often, that’s some kind of seafood, frequently fried but sometimes blackened, sautéed, or otherwise cooked without batter or breading. Fried shrimp and fried oyster po’ boys are ever-popular, but any iteration is fantastic, from perch po’ boys to versions featuring crawfish, catfish, or soft shell crabs. “Dressed” po’ boys are topped off with mayonnaise (Blue Plate or Duke’s, probably) or zippy, creamy rémoulade (with Creole mustard, please); shredded iceberg lettuce that inevitably wilts before the third bite; sliced tomatoes; dill pickle chips; and hot sauce (Crystal is a fine choice). You can find po’ boys with fried chicken and other non-seafood fillings too, the most notable of which is roast beef, so it has its own section below. If you prefer surf to turf, though, try this Fried Shrimp Po’ Boy recipe. 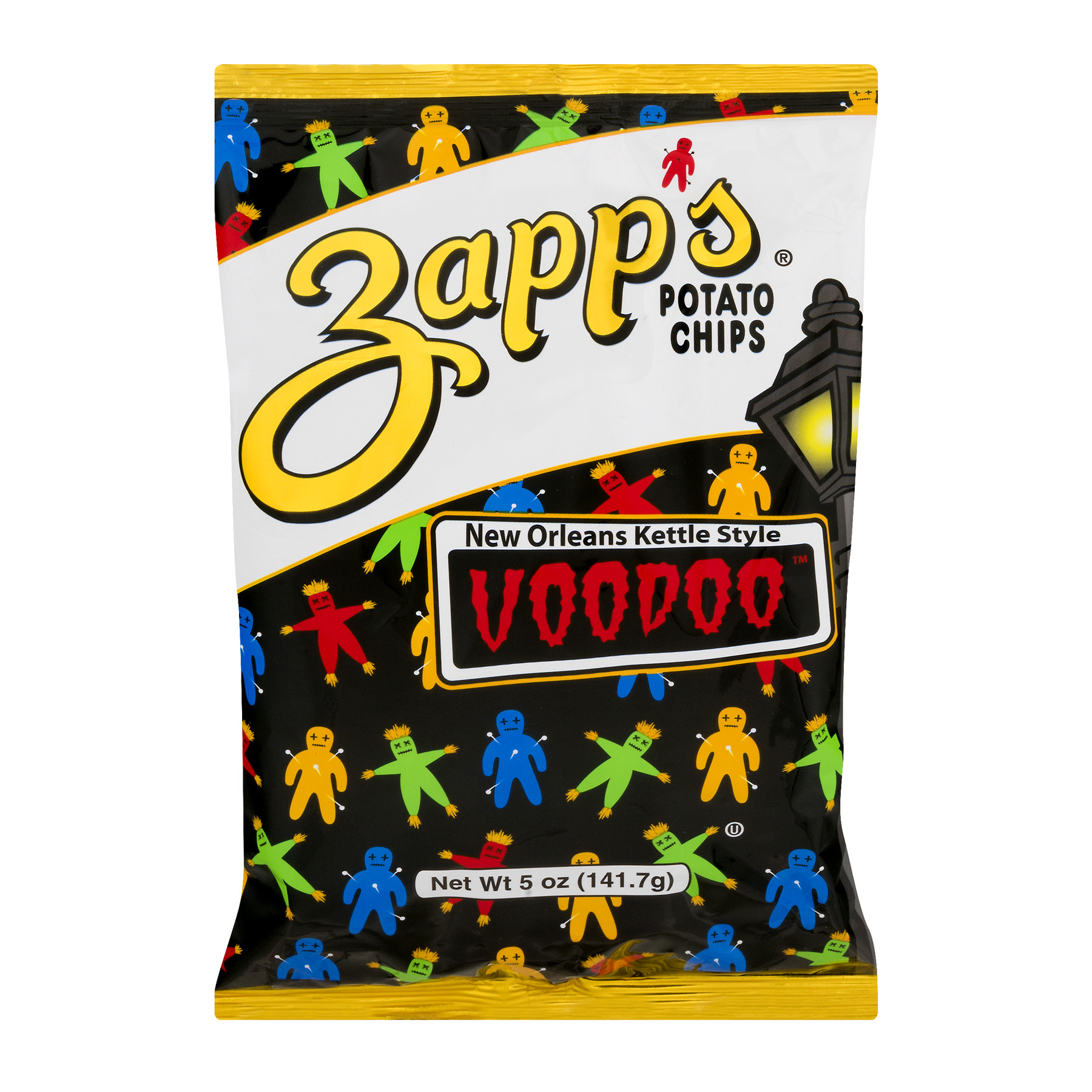 A pretty perfect accompaniment to any New Orleans sandwich.

The History of Jambalaya

Cajun vs Creole: What's the Difference?

It’s all about the debris (say it like DAY-bree). The vaunted New Orleans French bread is the same—fluffy yet crackly—and the dressings constant too (lettuce, tomatoes, mayo, pickles, hot sauce if you choose), but whereas fried seafood sandwiches stay relatively crisp through to the end, the roast beef po’ boy will collapse into a delicious mess of ultra-tender meat and gravy-sodden bread. It’s all part of its charm. The “debris” refers to the shreds of meat that fall off as you thinly slice the beef; these little bits are stirred into the rich, dark gravy, which in turn drenches the sandwich before the top piece of bread is put in place—to hold everything together just long enough for you to pick it up and take the first beautifully messy bite. If you’d rather avoid publicly staining your shirt, try this Roast Beef Po’ Boy with Debris Gravy recipe in the privacy of your own home.

Similar to but distinct from an oyster po’ boy, what sets this sandwich apart is—in keeping with the theme so far—the bread: thick slices of butter-crisp “pan bread,” to be exact, as invented (and still served) at Casamento’s. You can use buttered, toasted Pullman bread or even Texas toast in a pinch. Pile it high with crunchy fried oysters and dress it as you will, but swap the shredded lettuce for a more restrained amount of whole iceberg leaves. Try this Louisiana Oyster Loaf recipe to see what it’s all about.

If you're lucky, you can get some New Orleans beer delivered to your door to wash down your chosen sandwich.

There are, of course, countless other great sandwiches to be found in the city (The Hooks Cheddar at St. James Cheese Company is a perennial favorite these days), but the muffaletta, the po’ boy, and the oyster loaf are the old timers that have endured. They are culinary touchstones which will remain forever vital to New Orleans, and forever transcendent to the palates of all who are lucky enough to savor them.

It may be more difficult, if not impossible, to capture true NOLA authenticity at home, but if you can’t get to the city any time soon and you’re yearning for a taste of that New Orleans magic, take care with your ingredients and try your best, and add a bag of Zapp’s potato chips and a bottle of Abita Amber if you can. Close your eyes when you take a bite, and you just might find yourself transported.

Related Video: Eat Like You’re in New Orleans with These Essential Ingredients

Jen is an editor at Chowhound. Raised on scrapple and blue crabs, she hails from Baltimore, Maryland, but has lived in Portland (Oregon) for so long it feels like home. She enjoys the rain, reads, writes, eats, and cooks voraciously, and stops to pet every stray cat she sees. Continually working on building her Gourmet magazine collection, she will never get over its cancellation. Read more of her work.
See more articles