What Is the Difference Between Stuffed, Pan, and Deep Dish Pizza?

ByGreg Stegeman
January 24, 2019 Edit
All featured products are curated independently by our editors. When you buy something through our retail links, we may receive a commission.

As a dad who is typically responsible for preparing meals, every once in a while I cheat and order out. One of our take-out staples is (of course!) pizza. Luckily, living in Chicago, we have a lot of options. Despite getting plenty of thin crust hankerings, I’m going to leave that alone for now and talk to you about Chicago-style. Why? Because if Steve Harvey and the “Family Feud” crew surveyed 100 people about what people eat most in Chicago, I’d be shocked if our unique pizza didn’t pull in the number one spot.

Not necessarily because it’s all Chicagoans eat, but because it’s probably (rightly or wrongly) the most famous foodstuff in the city. And while some will tell you pizza is pizza is pizza, it really isn’t. In fact, just like its thinner counterparts, Chicago-style pizza has differences both in terms of type and quality—and many people (local and tourist, alike) are lost when it comes to navigating the city’s distinct types of thick-crusted goodness. Luckily, I’m here to assist. Why should you trust me? Because.

I grew up on Chicago’s North Shore in Skokie, IL. What’s that? You’ve heard of Skokie before? Well, before I move on, let me help with that too. Skokie is the town referenced by Verbal Kint in “The Usual Suspects.” In fact, my main rival in Little League baseball was a team sponsored by a company named Quartet—(spoiler alert) not a barbershop quartet, mind you, but an outfit that dealt in office supplies (like the board in the movie!). It’s also the site of Old Orchard, the mall referenced in “Mean Girls” (though, O.O. is a beautiful outdoor mall 10 times better than the indoor one depicted in the movie). Alright, now that I got that out of the way, you can focus on what we’re here for: the pizza! 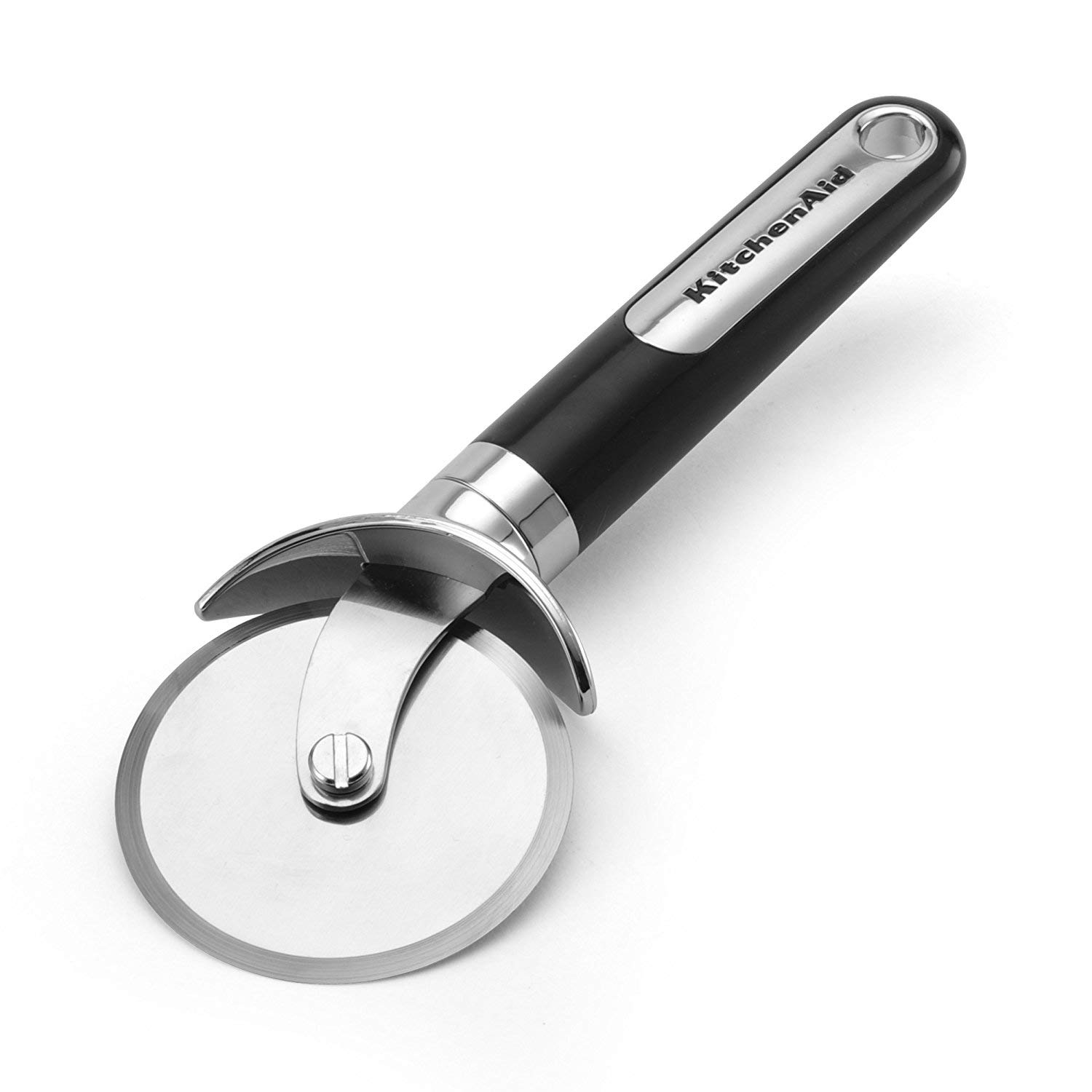 Whatever the style, you'll need this tried and true pizza wheel to cut it!

You know those people/articles who/that claim real Chicago people (if you grew up in Chicago proper: I get it, I’m from a suburb, but we had alleys, an “L”, and CTA buses, so get over it) don’t eat Chicago-style pizza? They’re wrong. We eat it, and we love it. Growing up, my house was about 10 minutes from the original Lou Malnati’s restaurant in Lincolnwood, IL and my family grabbed a “Lou’s” about once a week for years. For reference, the name “Malnati” is to Chicago pizza what the name “Ray” is to New York pizza. Actually, I don’t know enough about New York pizza to say that, but just know that the Malnatis are pizza royalty in Chicago, with ties to Pizzeria Uno (what I consider to be the trailblazer, and not to be confused with their franchise friendly Uno’s Pizzeria & Grill), Lou Malnati’s, and Pizano’s.

Get Lou's Where You LiveThe Best Frozen Pizzas You Can Order OnlineAfter high school, I ventured off to college about 15 minutes east to Northwestern University in Evanston, IL. There, I discovered Giordano’s. Today, there’s a Lou’s near campus, but at the time, Giordano’s was the king of town, and my, what a gracious ruler it was. Every Monday, they offered half-priced pizza. What a deal! Needless to say, my friends and I ate a lot of ‘za and it was during my time in college, switching from Lou Malnati’s to Giordano’s, that I became acquainted with the subtle distinctions in Chicago pizza.

The Lou Malnati’s of my youth was deep dish pizza. This differs from the Giordano’s of my college years, which was stuffed pizza. And this differs from the one-off celebratory thick-crust-fake-out-Chicago-style-pizzas of attended Bar Mitzvahs and sports banquets, or the all-you-can eat pizza lunch buffets which dealt in generic pies known as pan pizza. Whoa (read in your best Joey Lawrence voice)! I told you it’s a lucky thing I’m here to sort all this out. And now, I’m going to give you more info than you bargained for—which will come in handy the next time you visit my hometown and someone says, “Let’s get pizza!” Alright, so what makes them unique? Generally, it’s all in the order (or layering) of the ingredients, though there are subtle differences in texture as well. Here goes!

This is what I consider to be fake-out Chicago-style pizza. Here’s the deal: One of the key elements of a Chicago-style is it’s made in a pan so it’s thicker. But, just because it’s thick, doesn’t mean it’s genuinely Chicago. Do some consider pan pizza to be a Chicago favorite? Probably, but not me! Pan pizza is a thicker-crust option that isn’t particularly unique to the biggest city in northeast Illinois. Now, before you get upset, this doesn’t mean it’s not tasty. It is! It’s just to say that it’s not what one truly ought to be thinking about when one wants Chicago-style pizza. Think you may have gotten duped the last time you ordered Chicago-style? Then read on to keep from getting scammed in the future! Here’s the rundown of the pan pizza:

If I want pan (fully realizing I’m eating something other than Chicago-style), I go here:

Alright, now that I helped you recognize the faux-Chicago pizza (again, still good, and if you’re into it, that’s great), onto the real deal. The following descriptions represent general attributes typical of authentic deep dish and stuffed pizzas, respectively. Can you run into variations? Sure. As is often the case with things culinary, cooks and chefs can get creative, either to innovate or to stand out. That being said, the tried-and-true pizzas, from my experience with each, will look like what’s outlined below.

This is what I consider to be real-deal, Chicago-style pizza. Why? Because that’s what I grew up on! Also, because many accounts attribute the origins of Chicago-style pizza to Ike Sewell (Pizzeria Uno) and the Malnatis, and this is what’s served at their restaurants. How do you know it’s deep dish? Here’s the breakdown:

If I want deep dish, I go here:

Emerging later in the game than the deep dish pie described above, stuffed pizza has grown in popularity, especially among the out-of-town crowd and those who, historically, didn’t live downtown or on the North Side. Up until somewhat recently, North Siders had more deep dish options, and South Siders had greater access to stuffed pizza. This is probably why my mother-in-law from Garfield Ridge (a southwest Chicago neighborhood) still prefers Giordano’s to Pizzeria Uno. What’s a stuffed pizza like? Here’s the skinny:

If I want stuffed, I go here:

The next time you’re in The City of Broad Shoulders, keep these tips and suggestions in mind to find the pizza that will satisfy your inner tourist and your Chicago-style cravings. At the end of the day, it doesn’t matter which one you prefer. Try each and find the one that you like most. If you want to be as Chicago as you can, I prefer deep dish because of its historical roots. But, stuffed pizza, while a bit younger, has its origins rooted firmly in the Second City too. Enjoy!

Related Video: How to Make Detroit-Style Pizza at Home

Tropical Decor to Turn Your Place into Paradise

The Hawaiian and Not-So-Hawaiian Histories of the Mai Tai

What Is the Difference Between Grilled and Caramelized Onions?